I don’t think many expected that. Many were hopeful but I don’t think they really believed it deep down. On the latest Cat’s Whiskers Podcast we said it wouldn’t happen but of course it did. 11am Saturday morning we got the news that Evan Mosey would be returning to Nottingham Panthers after spending a year playing in North America, primarily for Rockford Ice Hogs in the AHL.

When Mosey first signed for the Panthers on 28th May 2014 he was very much an unknown quantity, however the rise of his career since then has been truly astonishing, from the Dutch league to the brink of the NHL in just four years.
Sadly, a contract extension wasn’t forthcoming from the Ice Hogs and he had to re-assess his options. Despite interest from Europe and the Elite League clubs Mosey decided to return to Nottingham. He told me “It was a busy summer trying to figure out which path to go. It was hard knowing nothing substantial was going to happen in the US and it was for me a no brainer to head back to Nottingham. I gave Corey my word if I had the chance to come back I would out of respect let them know first. Nottingham is like a second home to me I love the city, the organisation and the fans and that’s why I chose to come back.”

After watching Mosey make a major contribution to Great Britain’s gold medal winning World Championship campaign in April, it was obvious to me that his game had improved further. He looked quicker, more skilful and more confident in front of net. I asked him how he felt his game had improved over the past 12 months “Understanding the game was something I think I learned a lot more about. It’s such a small ice surface that things happen fast so you have to know where everyone is at all times a long with yourself being in the right position. Also quick plays for me I think have improved just because the small ice surface like I mentioned and not having a lot of time and space when you have the puck. You need to be very efficient with the puck and skilled.”
Corey Neilson also alluded to this in an interview on the Panthers website saying that he was faster and that speed can cause some damage on Olympic size ice surfaces. 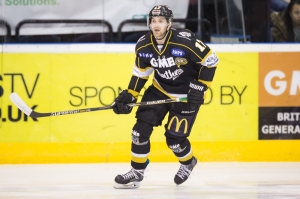 On how excited he is about the squad that Neilson is building for the coming season, Mosey said “I think it’s an exciting time of the year for fans and players. You get to see the different pieces of the puzzle Corey is trying to put together. I think Corey does a lot of homework on guys and finds the best guys to fit the team and the systems he will have in place. So for me it’s exciting to see who he’s bringing in and how they can help the team in the upcoming season”

It’s not just Evan who we will be seeing more of in Nottingham as he enjoys incredible support from his family, particularly his parents Graham & Cindy who will once again be making several trips over from Illinois to watch Evan play. After a season of relatively local travelling they will be racking up the air miles once again to watch their son play. Graham told me “We saved a year, so the air mile bank is full. The September home CHL games are already booked.” I also asked Graham if he was ever going to go anywhere else but Nottingham after not returning to the Ice Hogs. “He had many generous offers. In the end it was about where he felt he’d promise to return when he left for the AHL.
Also, you have to know Evan to understand his loyalty and that’s what makes his decision not a surprise to those who really know him.
For Evan, having family an hour north was a factor also as he does feel at HOME in Nottingham.”

It’s clear from the conversations I’ve had with Evan and his father that he was always going to come back to Nottingham, if perhaps a little earlier than expected. Is he too good for the EIHL? Probably yes, in my opinion, but it shows the ambition of not only the Panthers but also the attractiveness of the league that players like Mosey a willing to come here while in their prime. It seems there is now a focus on younger players throughout the league and having an experienced player like Mosey on the roster can only help (and it has been hinted that there may be a leadership role for him).

I am delighted that he is back, he makes our team better by being part of it. I genuinely didn’t think we would see him back at Panthers for a while, if at all, so I think firstly Corey Neilson and the club deserve an immense amount of credit for bringing him back and secondly Evan himself for honouring his word.
Speed returns to the NIC, and I could not be happier.