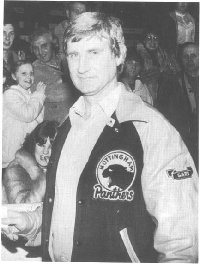 Gary Keward, the man we owe a great debt to, as it was he who was responsible for the re-birth of the Nottingham Panthers in 1980 after a 20 year absence from the British ice hockey scene.

Keward, a fan from the old days, arrived back in the UK with his two sons, Dwayne & Chris, who were looking to play Ice Hockey. They found their chosen sport at the Queens’ Rd rink in Sheffield with a team called the Lancers. Gary moved the Lancers to Nottingham, after eventually persuading new rink manager Malcolm Balchin to give the game another try, and renamed them Panthers. After a gap of 20 years Ice Hockey was back in Nottingham and Gary couldn’t have known what he was letting himself in for. After the opening match, in which Solihul Barons went down 7-4, it took just four games for the team to be playing to packed houses, some fans paying five times the face value for match tickets. Gary was to remain as manager until 84/85 season when he returned to Canada.