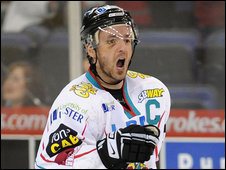 Colin Shields and Tony Hand are a rare breed as the only two British trained players to be drafted into the NHL. Hand was selected by the Edmonton Oilers in the 12th round (252nd overall) in 1986; more recently fellow Scot Shields was selected in the 6th round (195th overall) by the Philadelphia Flyers in 2000. I’ve been lucky enough to speak to Colin about his career in the UK and North America.

I first asked him how his career started, he said “I started playing hockey in Scotland until I was 13, moved to the Canada at 14 and played junior hockey from where I got drafted by the Flyers. I decided to go to school and enrolled at the University of Maine”. I asked him if he thought he would don the Flyers jersey and play for them. “I had a good time at college I felt my game improved and I got stronger, unfortunately the NHL had its lockout that season (2004/05) and I found myself on the East Coast Hockey League”.
In his debut season in the East Coast, Shields iced for the San Diego Gulls, Atlantic City Boardwalk Bullies and the Greenville Grrrowl. I asked him how he felt about getting traded. “I thought San Diego would be a good idea but it didn’t work out, they had a lot of veterans and it was my choice to leave. Atlantic City said there was a chance for me and I felt I played well had some personal success, however coming up to the play-off’s teams are trading and shuffling their rosters and I went to Greenville for the last month. It’s such a business over there as all minor league teams are owned by NHL teams and the NHL teams are sending their prospects down to gain ice time, it happens in pro sport, you can’t take it personally and you have to that hope things work out for you”. Whilst on his first North American adventure, he found himself being team mates with now EIHL stalwarts Brad Voth, Kevin Bergin and Trevor Koenig, so was he surprised with how those players adapted to British ice hockey? “No, these players are top ECHL players, and teams do their homework. It’s a big investment and the team needs to make the right decision”. What about the differences are there in the Elite league compared to the ECHL? “It’s a similar standard of hockey but I think the ECHL has more depth in the third and fourth lines”. Whilst Shields was in the states he mentioned he was very fond of his time in Idaho, “Idaho had a great set up, really took care of the players”. After his East Coast experiences would he ever go back? “I’m under contract with the Giants for the next three seasons, however I might go back if it was an unbelievable offer”. So who knows that will happen? Only time will tell.

Shields returned to Britain after his first East Coast experience to play in Belfast for the Giants, alongside Theo Flurey and current Panther Marc Levers. I asked him if he ever imagined that he’d ever be teammates with a legend such as Flurey. He said “No, it was a real treat for me, however I’d made plans to try and crack North America and thought I’d end up playing with him there!” As it was Shields first taste of the EIHL, how did the opportunity arise? “Belfast called, I knew they were signing some good players and we ended up winning the league.”
Shields returned to the ECHL the following season, signing for the Fresno Falcons. He said of his return “I went back to prove to myself that I could crack it, first time round I didn’t have the confidence and didn’t have the scoring touch. Belfast helped me, the second half of the season (06/07) in Idaho, I averaged a point a game, I don’t have any regrets about going back to North America. I wouldn’t change a thing”
After Colin’s second stint over the pond he returned to the EIHL and signed for Rob Wilson’s Newcastle Vipers. On the ice Newcastle hadn’t really been challenging unlike his former team Belfast, so was a there a different mindset with the fans in Newcastle. He said “Well all the fans in the Elite League want their team to win, and it’s no different in Newcastle, both teams have had success with Vipers winning the play-off’s and Giants winning the Challenge Cup &Knockout Cup. Who’d pay money to watch a losing team? All the fans in the league are good”. After a season with the Vipers, Shields returned to Belfast for the 2008/09 season, winning a Challenge Cup & British Knockout Cup winners medals for his efforts.

At the start of this season the Giants raised a few eyebrows by signing signing former Manchester Phoenix netminder and Colin’s cousin, Stephen Murphy. Shields believes Murphy can backstop the Giants to glory, however Sheffield Steelers spokesman David Simms doesn’t share that the view by saying “I told you last year you won’t win the league with a British goalie and I haven’t changed my mind”. However Colin and the Giants faithful hope Simms has to eat some humble pie, saying “Well Murphy’s leading the way in the goalie stat department, he can say what he wants, that’s his opinion, the way to do it is to prove him wrong”. Also one signing that cannot be ignored is the signing is the 6feet 4 inches and 225lb’s of left winger Sean McMorrow, a player who has collected 309 PIM in a mere 39 games, “He’s the toughest player in the league, he does a great job and protects us, and fighting has its place in the game, he’s good for the game and good for the fans, last season we got pushed around and got run around and its refreshing to have him protecting us”.

With teams now preparing for the final part of the season and gearing up for the play-off’s, who else has impressed him? “Nottingham has a great team, Corey Neilson has done a great job bringing in skilled players, Cardiff have upset a lot of teams and are rough and tumble and Stevie Lyle has been playing great for them.”
One of the challenges facing the Giants is that every road game they have to fly to games instead of a bus ride, does that hamper any pre-game preparations at all? “At the start of the year and takes time to get used to the travel, its hard to judge when you have to eat and rest but the guys are all professional and after a while its not really a problem”. Whilst the Giants, Blaze, Stingrays and Panthers are secure in the their arena’s, Sheffield and Newcastle have been playing in smaller rinks as well as their normal rinks, How did Colin find playing in Whitley Bay? “It was interesting to say the least, but there is no real bad rink in the UK, but any rink that the Giants win in will do for me”.

I asked Colin if he felt the EIHL was starting to lose the ‘beer league’ tag that some people within the game have labeled it, he said “Guys are moving from England to Germany, Norway and British players are improving. It is the strongest league in a while and by far the best, I think the title race will go down to the wire and it’s great to be apart of. It’s a shame we lost Basingstoke and Manchester, but we’ve created a better league and it’s improving the image of the British game”. Being a British player how does feel his former team mate Dave Phillips will fare after being signed to the Blackhawks organization and does he think he can make the jump to the NHL? “Dave’s made the jump and doing pretty well if he stays healthy he’ll do well and I can see him making the jump, it can only do great things for British hockey.”
Shields has been on some talented rosters that have won trophies, what are his career highlights? “We went to the Championship games at College a few times, Winning the league in 2006, then the cups last year and personally Tony Hand and I being the only British trained players to get drafted to the NHL”.

I asked him how he relaxes off the ice when he has some free time? In Northern Ireland you can have a lot of fun and I’m trying to get the most out of life as you only live once, I also enjoy golf and Belfast has some great golf courses”. Colin has also become the Gok Wan of British ice hockey with his unique take on fashion by wearing a rather bright and multi coloured shirt, does he still don the shirt? “I’ve not worn it this season, its my lucky shirt so there is still time!” After a laugh about the shirt how does the leagues leading goal scorer describe himself? “Easy going, fun, sociable, caring and a joker”.
As a final question I ask what Colin Shields will be doing once his hockey career is over? “I’m lucky I had a good education and I’ve got that to fall back onto, however I’ve a few years left in me and I’m loving my hockey at the moment so I haven’t given it a great deal of thought”

The Cat’s Whiskers would like to thank Colin for his time and Jay for conducting the interview.