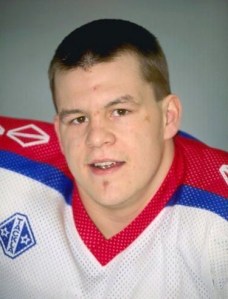 Simon Hunt made his debut for the Panthers aged just 15 after being part of the Nottingham junior system. What followed was a twelve season career with his home town club, which saw him become the all time Panthers leader in penalty minutes and one of the few British players to ice in the Ice Hockey Superleague.

Despite being just 5 feet 6 inches tall he played with a big heart who thought nothing of taking on players much taller and heavier, more often than not coming out on top. One particularly memorable fight was with Steelers Les Millie at centre ice in our old barn, a brutal battle that saw Millie lose his front teeth and both players chucked out of the game! As well as the brawn Hunty could also score his fair share of goals and possessed a wicked slapshot.

Since leaving hockey Simon has built up his own tiling business. He still ices at the NIC for rec team Nottingham Northstars and also iced for Panthers in a charity game in 2008 raising funds for Macmillan Cancer, scoring 1+2.