More Ones To Watch

After picking several prospects to keep an eye on last season, Jono Bullard has been at it again after covering GB Under 18’s & 20’s, EIHA National & EIHA Conference for 247.tv & Freesports. Here are his latest picks of players to watch from the UK’s junior ranks.

Another season over and another season where I’ve been mightily impressed once again by the quality and depth of talent of the junior ranks in Great Britain. Yet again I’ve had the privilege of covering Great Britain U20’s & 18’s, The EIHA National Finals & the EIHA Conference for TV & web broadcast. I’ve seen 117 games, well over 300 players and from those I’ve picked ten more players who I feel will be talent to keep an eye on over the next few years, however it could have been at least twenty and it’s taken me a while to whittle it down to ten, such is the high standard in juniors currently. Some names will be familiar, some not so much, but these are all players who I believe can go on to much bigger things as their careers progress.

This list is slightly different from last years, linked here. There are no caveats in this list and players are selected from all age ranges from Under 11 to Under 20. This list of ten includes two netminders, two defenders, one utility & five forwards, starting with:

Netminder: Ben Clark-Leach – Swindon
I’ve seen Ben in two tournaments this year, both times he was on the winning side and both times he was the main reason why his teams won, especially in the national finals where he was simply outstanding keeping the free-scoring Manchester Storm Acadamy down to one goal in the group stages and then shutting out Sheffield in the final of the Under 11 competition.
He then led the South-West Conference to the Under 11 EIHA Conference title with another series of excellent displays, including another grand final shut-out, this time 3-0 against the Midlands.
At 11 years old he will now move up to Under 13 level from next season. Keep an eye out for Ben, if he continues at the incredibly high standard he’s set for himself I fully expect him to be a future starting netminder for Great Britain if his performances of this year are anything to go by.

Netminder: Luca Tessadri – Chelmsford
This is the second season I’ve seen Luca in action and he’s impressed me hugely virtually every time I’ve seen him between the pipes. He’s a mobile netminder with a fantastic glove hand & excellent rebound control. I will confidently predict now that he will be a Great Britain starting netminder in the future, he’s that good.
At just 13 he’s already playing up to Under 15 level and produced the best save percentage at conference since 2013

Overall he has played 123 games in his short career with a mightily impressive save percentage of 91.64%.
Remember the name, I expect we’ll hear it a lot more in the future.

Defence: Noah Kaariainen – Manchester
I first saw Noah play in an Under 11 challenge match for England in Dumfries last year. I’d been told to look out for him by BBC commentator Seth Bennett, who is chairman of the Manchester Storm Acadamy. Noah has a Finnish father who played at high school level in the USA, and like many players with Scandinavian roots he’s an incredibly skilfull skater who is excellent when transitioning from defence to attack. On the rare occasions he is caught out venturing forward his speed and skating ability ensures he is one of the first players back to snuff out any opposition offensive threat.
With 55 points in 69 games and already playing up to Under 13 level at 11, Kaariainen has a bright future ahead of him as an offensive defenceman.

Defence: Jordan Griffin – Bradford
Conference 2018 was the first time I’ve seen Griffin play and admit that I was looking out for him as he was named as the latest apprentice to join Sheffield Steelers ranks.
I was impressed with what I saw, a big, strong mobile defenceman who possesses an bullet of a shot which is almost always on target.
He looks to be an excellent pick up by the Steelers and a player who already has experience at NIHL level. Another one to watch out for next season I feel.

Defence/Forward: Jack Brammer – Sheffield
Brammer is comfortable playing in either defence or attack and is excellent in both positions which makes him a huge asset to any side he’s playing on.
For Sheffield he predominantly plays as a forward where he scored an astonishing 53 goals in just 16 games in the Under 15 regular season.
For Midlands Conference he played on the blue line, transitioning superbly from defence to attack and forming a great partnership with Rhodes Mitchell-King who played a more stay at home role to allow Brammer to venture forward.
Brammer made his GB debut at Under 16 level in the recent Spring Classic in Swindon, expect many more appearances at international level for this young man.

Forward: Connor Lee – Manchester
Connor is only playing his second season of hockey after giving up playing football with Stoke City to skate with the Manchester Storm Acadamy.
Another player who Seth Bennett told me to watch out for, Lee is a naturally gifted skater and forward who possesses great stick-handling skills. His ability to beat opposition defenders and get towards the net has made him a huge asset for Storm Under 11’s this season and he has already played up to Under 13 level despite being just 10 years old.
If this rate of progression continues expect big things from Connor Lee.

Forward: Finley Bradon – Billingham
Finlay Bradon is just 12 years old. Already he has scored 160 goals in just 128 games, is averaging almost a point a game at Under 15 level where he made his debut at 11, and this season was the top scorer in the Under 13 North league in the regular season with 67 points in 17 games.
Bradon is a naturally gifted goal scorer with great hands and an ability to fashion a chance out of nothing. He’s another who I expect to see as a GB regular if he continues at this rate of progression.

Forward: Zaine McKenzie – Nottingham
Zaine McKenzie is the sort of player I really like. Works hard, does the dirty jobs and grafts but also has no shortage of skill and knows where the net is.
Some may think it odd I’ve chosen McKenzie when the Nottingham Under 15 team includes the likes of Jack Hopkins, Toby Fisher & Aaron Smith. I firmly believe that without McKenzie doing the hard graft the aforementioned players wouldn’t be anywhere near as successful in front of the net.
Every team at every level, junior, amateur or professional needs a player like McKenzie. I shall watch his progression with interest.

Forward: Scott Jamieson: – Fife
Jamieson is a big, powerful forward who is already has an Under 20 national championship to his name with Fife Falcons and was the 2nd highest points scorer this season for his team Kirkcaldy Kestrels in the senior Scottish National League.
With two goals in the England v Scotland U19 international and four goals for Scotland U17 at the Conference he made a statement. He’s clinical in front of goal, stong enough to hold off defenders and create his own chances but also fits superbly into any forward systems. I’d expect him to follow Reece Cochrane to Fife Flyers in the very near future.

Forward: Kieran Brown – Bradford, Blackburn Hawks & Sheffield Steelers
Brown will be familiar to most people reading this I’m sure, but this is his first season back in the UK after spending two seasons in the USA at Iowa Wild.
He first came to my attention at a GB Under 16 tournament in Dumfries in December 2016 and I’ve kept an eye on his career since then. While not getting too much ice time for the Steelers he did ice regularly for Blackburn, scoring 40 points in just 18 games. He also starred for GB Under 18’s in Estonia and was quite simply outstanding for Northern Conference at the EIHA Conference, scoring 6+6 in 5 games. 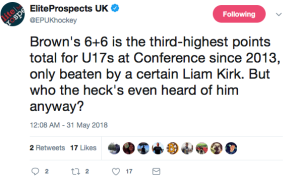 I feel Brown now needs to be given ice time by the Steelers to develop further as I firmly believe he is capable of being drafted to the NHL along with GB Under 18’s team-mate and one of my picks last year Mason Biddulph, such is their natural talent. Brown has grown, bulked up and is starting to look like a complete forward. 2018/19 should be a breakout season for him at senior level.

That’s my ten, and believe me it was an incredibly difficult job to whittle it down to that number as I could have chosen around 25 players, such is the standard. However I feel these are the ten that could go on to bigger things as their careers progress, along with the eight I chose last year.

It is only my opinion and some reading this may feel differently, but personally I’d like to see as many talented players as possible progress through the junior ranks to the Elite League and beyond, I genuinely believe that the talent is there to provide a production line for many years to come if that talent is nurtured and encouraged.

In addition to the senior team we are likely to have the first British trained player for a generation drafted to the NHL in Liam Kirk. I strongly believe others will follow and maybe more as legions of youngsters are inspired by the achievements of Great Britain and Liam Kirk. British Hockey now has the chance to stand up and be noticed and to steal a quote from the 2012 Olympics it’s never been a better time for those running the sport to inspire a generation.