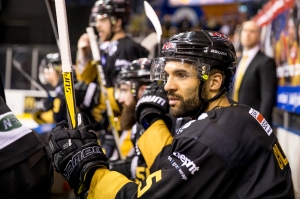 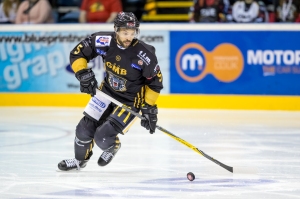 Paul Balm
No one should remember David Clarke for his last season. The time was right for him to retire and if I’m brutally honest (and I truly, truly don’t want to be) I think it was always on the cards. He will be missed to the extent that if I was Chernomaz I wouldn’t even try.

Jono Bullard
Simply a true Nottingham Panthers legend who will be extremely difficult to replace. It’s absolutely right that his #5 shirt will hang in the rafters for everything that he has contributed to the club both on & off the ice.
Such a shame that his departure couldn’t be marked with a piece of silverware, especially after he had done everything possible to get us into the play-off weekend.
Personally I felt he had another season in him but I totally understand and respect his decision to retire.

Andy Haywood
The final season for David Clarke after a truly illustrious career with the club, and quite rightly, will see the #5 Jersey being retired by the club.
On the ice Clarke wasn’t a shadow of his former self but he was used a lot better and sparingly this season than he was last season and I think it helped. Sure, he didn’t net 20/30 goals this season but his limited ice time meant we saw a decent showing from Clarke rather than watching an old great fall from grace.
His performance in the playoffs, especially against Belfast, proves how much of a loss to the club he will be, and the reaction from the entire bowl at Playoff Final Weekend proves how much of a loss to the EIHL he will be. Seemingly universally (other than in Braehead because he once had a pushing match with Dominic Noel) loved across the league and a really great ambassador for the sport. Hope he sticks around the sport and hopefully this club in the future.

Antoine Marie-Jeanne
Legend. Deservedly having his jersey retired and leaves a huge gap to fill in the Panthers roster. Although his role diminished in latter years, he was always a danger and still had one of the hardest (albeit not the most accurate) shots in the EIHL. Whatever the future brings I wish him all the luck. Part of me thinks we’ve not seen the last of him in a Panthers role however.

Adam Reddish
What can you say that hasn’t already been said about the club legend? So desperately sad for Clarke that his professional career ended with the team stuttering through to the conclusion of a trophy-less season. Similarly to recent seasons, Clarke’s ice time was carefully managed to ensure maximum productivity and this worked well. While the famed goal scoring continued to be understandably slow, the effort certainly did not, and his tenacious play was one of only a few bright sparks of a desperately underwhelming post-Christmas run. The announcement of his retirement seemed to rekindle memories of #5 at his pomp, turning in a superb pair of games against Belfast in the PO Quarter Finals to lead his side to the Finals weekend. Sadly though, there was no fairy tale ending and Clarke’s last act as a Panther was his participation in a meaningless 3rd/4th place match in front of a very appreciative crowd. A true club legend and a massive gap to fill for Panthers new Head Coach.

Tina Taylor
It feels like Clarkey’s minutes have been managed a little this year which isn’t a bad thing for a veteran hockey player, he’s contributed on the ice and behind the bench and whilst I’d have loved to have seen him go out with a bang and with a trophy sadly it was a steady progression and a distinct lack of silverware instead.
But whatever this season has brought, David Clarke is a Panthers legend, end of.