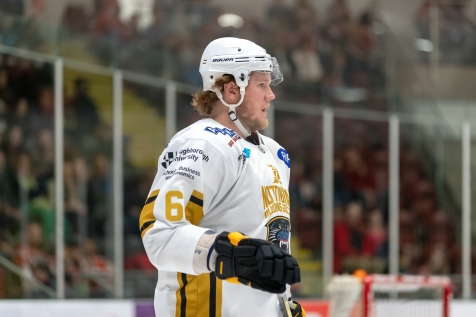 Joe Balm
A must sign for me.  I personally think he has been one of our best players this season and the best all round defensemen in the league.  Very good defensively in his own zone and is great at quarterbacking our powerplay.  My only criticism would be that given his pedigree and the role he has as our top D-man, I was hoping for a little more offensive output.

Sam Balm
Arguably one of our best players this season and always looks calm and smooth when on the puck.  When Olsen got injured towards the end of the regular season it was a big blow to the defence and the team as a whole.  The only criticism I would have of Olsen is that he hasn’t contributed as much offensively as I would have expected him to.  Having said this, I feel he is an absolute must sign player for 19/20 and should be one of the first names on the roster.

Antoine Marie-Jeanne
Nobody will be surprised to hear me say he was my Import Player of the Season.  A slow-ish start was followed by some imperious performances, even when we weren’t playing well.  A couple of injuries certainly affected his and Panthers games.  For me, one of the top import d-men in the league and one I’d like to see back next season in a leadership role…although more goals, especially on the powerplay, are needed!

Adam Reddish
A quality acquisition for Panthers with his NHL resumé, and he more than lived up to expectations with a succession of commanding and influential performances.  A hulk of a character, Olsen used his size exceptionally well and it was noticeable that very few forwards managed to win one-on-one physical battles with our #6.  It wasn’t all about his size though, and as you’d expect from someone with 100+ NHL appearances under his belt, his positioning and skating abilities also saw him as the undoubted leader of Panthers D.  Also the possessor of a bomb of a slapshot, but it was a slight regret that this wasn’t seen more often as part of a highly dysfunctional powerplay throughout the course of the season.  An unfortunate injury meant Olsen missed much of the final quarter of the regular season, and whilst this made little impact to the Panthers league prospects, it wasn’t a 100% fit Olsen who returned to the line-up for the tail end of the campaign.  Undoubtedly my import of the season and keeping everything crossed we see him plying his trade back in Nottingham for another year.

Tina Taylor
This was a signing for the ‘old guard’, the lifers, the ones who can remember his Dad playing for Panthers and while the novelty was cool, the reality was way cooler!  Olsen is a great player, defensively sound, calm on the puck, dependable, the boss on the Power Play and he deserved a better team to play on frankly.

I hope Panthers were already talking to him before the season ended because whoever the coach ends up being they’d be lucky to have him!