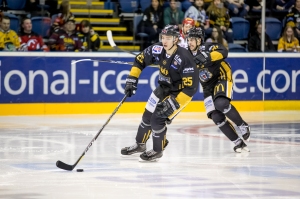 Paul Balm
If Tetlow doesn’t get a full time contract with the Panthers next season then something is wrong. Yes, he’s still young and that inexperience showed but there are the makings of a pretty decent defenceman there and they can only be nurtured to their full potential if he is playing on a top flight team.

Jono Bullard
Corey found a diamond in the rough and with a bit more polishing I think Tetlow has the potential to be one of the best British defensemen in the league.
Still young and inexperienced but he grasped the opportunity with both hands when it was given. Perhaps would benefit from another two-way deal next season before becoming a full-time fixture on the blueline in 2019/20, but I’d be far from disappointed if Rich Chernomaz decided to make him a permanent fixture for the coming season.

Andy Haywood
A bit like Sam Gospel, Tetlow didn’t get a great deal of opportunities to show his talent. That being said, out of the 4 young British players we signed, we saw the big defenceman the most.
A physical player in his own end, he could be a really good prospect for the British game. I felt he made a few rash decision pinching in at the opposition blueline looking for 50/50 pucks against savvy import veterans that led to a few odd man rushes, but overall he looks like he could be the real deal. I’d far rather he did that a few times than be completely timid and not trust his instincts. I’d love to see him back in a Panthers shirt and given more responsibility.

Antoine Marie-Jeanne
Very promising Brit who I hope is part of the Panthers roster for a long time to come. Skates well and isn’t afraid to mix it. Started to log more ice time as injuries bit towards the back end of the season and didn’t look out of place. Plenty more to come from Big Josh.

Adam Reddish
Opportunities for ice time were very limited until Brisebois’ departure, but as the season progressed, Tetlow become a more familiar presence during games. A formidable frame disguised surprisingly good puck-handling and skating abilities, a fluke goal in a road game against Edinburgh provided reward for his commitment.

Tina Taylor
I love that Panthers have embraced the under-23 ‘rule’ this season as we’ve been treated to a taste of what’s trying to break through, I also love that I get a few lines to wax lyrical on how much I’ve enjoyed seeing Josh Tetlow ice for the Panthers.  You can’t fail to notice him as he’s the big friendly giant but I like how he plays, although he hasn’t dropped the gloves for the Panthers we know he can, he has a definite presence about him on the ice and aside from a few novice style non-critical errors, he’s played well when he’s had his chances.
I really, really hope the new coach also embraces the same ethos with the youngsters as Corey Neilson did and we get to see more of Josh in a Panthers jersey.