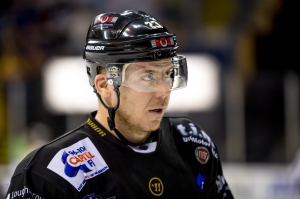 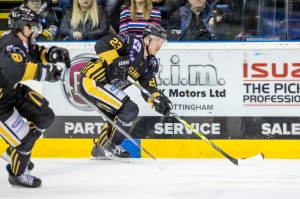 Paul Balm
Possibly the second most frustrating forward we had this season. The best pass he made all season was probably the kick to Pither in Dundee.

Jono Bullard
Came to Nottingham with high expectations due to averaging over a point a game in Asia, Denmark & the ECHL. Didn’t quite live up to that at Panthers due to a slow start but I felt he had a stronger second half of the season, especially after Luke Pither arrived. I would like to see him return, especially if Pither comes back.

Andy Haywood
Bit of a slow start but was one of the brightest stars in the CHL and upon his return to Nottingham after he went back home for family reasons I felt he picked back up again. Determination and skill was his main asset, and he scored a couple of pearlers out of nothing. Forged a really good partnership with Phillips early on in the season, and then with Pither later in the season. Wouldn’t be averse to seeing him back, but also wouldn’t lose any sleep if he didn’t return.

Antoine Marie-Jeanne
Looked like he was going to score plenty of goals when we signed him, but although showed flashes, he didn’t really get going until the arrival of Pither and Vaskivuo late on in the season. Can’t fault his work-rate and is hard to knock off the puck while along the boards. If he was back next season with his tail-end linemates I wouldn’t be upset.

Adam Reddish
Signed to fulfil the much-needed sniper’s role, his return of 18 league goals, Derlago’s lowest productivity since the 2005-06 season, typified a frustrating season. A man with goals galore on his hockey resume never quite clicked in Nottingham and failed to build any notable chemistry with fellow forwards throughout the majority of the season. Many a game passed without any recollection of meaningful, game-changing contributions from the Panthers #23, although the introductions of Luke Pither and Mike Vaskivuo at the back end coaxed a greater all-round output from Derlago. Despite this, Derlago’s almost a point-a-game record for Panthers this season still feels somewhat of a disappointment.

Tina Taylor
Derlago looked to be the closest thing to a goal scorer, a sniper if you will, that we were going to get on the Panthers roster in the summer, we were excited by him and his numbers were worth a raised eyebrow or two.  Sadly he only really seemed to get going after Pither arrived, they struck up a great partnership, I get that Pither probably wasn’t available before he actually arrived but it was another reason that we were left lamenting the fact that he hadn’t arrived sooner.  I expected Derlago to stand out more in the goals column but it didn’t work out that way, perhaps he wasn’t getting the service or perhaps he wasn’t in the right place to put the goals away, I’m not enough of a student of the game to be able to tell but the upshot of it is that I don’t think we got what I expected.