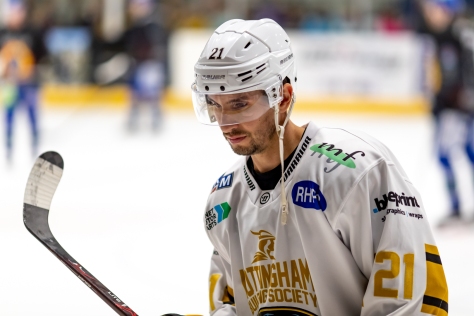 Joe Balm
Biggest disappointment of the season by far, came in with a great pedigree and I was expecting him to be a real threat offensively but that’s clearly not the case.  Started reasonably well but since November he’s been pretty much non-existent and like Kovacs, has just ridden on Guptill’s coat tails.

Sam Balm
Perhaps the most disappointing signing this season when comparing expectations when he was signed to what we actually received.  Whilst I didn’t expect him to achieve the numbers he did in Edinburgh when he was last in the league, I did expect him to be up there with the top scorers in the league and what we received was only 12 league goals and a 39th place finish in league scoring largely down to being on a line with Guptill. Due to this poor return I would not retain Hurtubise for 19/20.

Antoine Marie-Jeanne
His previous stint in the EIHL led many to believe he would be right up there with the league’s top scorers.  Hurtubise is a pure sniper and scored goals for fun in the early part of the season but fell off dramatically as the Panthers’ season collapsed.  Towards the end of the season, it seemed he’d reinvented himself as a more physical player, but that’s not what he was brought in for.  Disappointing.

Adam Reddish
Signed as a playmaker, with the task of feeding the roster’s more natural goalscorers, Hurtubise’s output was disappointing throughout the year.  The early signs were promising however, and Chernomaz had clearly identified him to be his go-to guy on the powerplay.  Everything seemed to be directed through Hurtubise with the man advantage and this initially worked, but opposition coaches quickly sussed this out and locked him down – vastly reducing his effectiveness.  In even strength situations, there was a tendency to go missing during games and his lack of skating speed and paucity of potency from line mates in lighting the lamp (not his fault) meant he was easily nullified as an offensive force.  Even the snap of his passing diminished over the course of the season, and was guilty of making that extra pass on the offensively play all to frequently. Still put up respectable numbers, but it was clear that Hurtubise was nowhere near the same calibre of player who’d stood out for Edinburgh all those years ago.

Tina Taylor
I don’t believe that I was a hockey fan when Mark Hurtubise was at the Edinburgh Capitals but from what I heard from other people when he was signed, I expected more of a contribution to Panthers goal tally.  I can recall one particular goal of note, early in the season in Altrincham on the Power Play, Hurtubise was stood in the left circle, someone put a perfect pass to him and he ripped it into the top corner despite Ginn leaving an unfeasibly small corner of his net exposed, other than that, I’m out.

Apparently ‘second album syndrome’ is also a thing when a player returns to the league and plays for a different team.