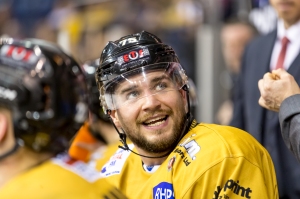 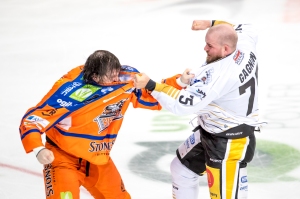 Paul Balm
His only real highlights were his fights which says it all really.

Jono Bullard
The sort of player that epitomises how the game has gone, can fight (and very good at it he was too, just ask Zack Fitzgerald!) but can also play a bit.
Made some mistakes at times but no more than any others and I felt he was decent at the back. Wouldn’t be adverse to seeing him return in August.

Andy Haywood
Anyone who says “I don’t fight because I have to. I fight because I love it” is alright in my book. As far as dropping the gloves goes, he’d be a solid 8 maybe 9 out of 10, but with the gloves on he wasn’t as effective. Sure, he wasn’t a bad player by any stretch, and he certainly wasn’t just a fighter or a goon etc but could be average at times. Loved a good head fake and the odd rush up the ice, but overall was a defenceman first kind of player. Pretty good in his own zone, and strong along the boards. I certainly wouldn’t be averse to seeing him in a Panthers shirt again, did a steady job on the ice and cracked a few skulls along the way.

Antoine Marie-Jeanne
Decent d-man but tailed off as the season went on. Brought a physical edge to the team and policed the ice well without going OTT. Had a couple of proper tilts and was scared of no-one, at one point causing someone to say on social media that “if Fitzgerald keeps fighting Gagnon, he’s going to end the season as a vegetable”.

Adam Reddish
An entertaining presence on the roster, his physicality was there for all to see in several early season tilts. A no-nonsense, gritty character, his stay-at-home tendencies meant he was largely dependable at the back – clearly a player who knew his limitations, although as the fights dried up he seemed to cut an increasingly frustrated figure on occasions where going toe-to-toe wasn’t a reciprocal thought from opponents.

Tina Taylor
Fights because he likes it but he was surprisingly short of combatants, particularly in the latter stages of the season and seemed to get frustrated by that. I would have liked to have seen him channel that frustration, exert himself more physically and tee up some devastating hits to make up for the lack of fights.  As a defenceman he was another no-frills sort but a little less mobile than some of his counterparts and not quite as quick which opposition forwards were able to exploit.  Gagnon is a defenceman who can fight which is the right way around and it was good to have some toughness back in the team.