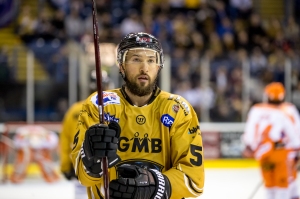 Paul Balm
In the short time he was here Vaskivuo showed some good moves and picked up a few good goals. Not very exciting though.

Jono Bullard
I really liked Vaskivuo as I felt he offered something different. For a Scandavian he has a North American playing style I felt. 18 points in 20 games wasn’t too shabby at all for a player coming in mid-season.

Andy Haywood
19 points in 20 games for Vaskivuo and he looked quite good most nights, but suffered from Stephen Schultz syndrome it seemed. For every great play there seemed to be a career ending injury, when he went down in front of me holding his knee in one game I was convinced that was him done for the year, but he played the next night!
Would have been nice to have been able to evaluate him over the course of a full season, but on the basis of 20 games he was pretty good.

Antoine Marie-Jeanne
Late signing but one I wish we’d made earlier on. Struck up a promising partnership with Pither & Derlago before injury ended his season pre-POFW. Panthers were a better team with him in the side and I hope he’s back next year.

Adam Reddish
Seemingly a strong and popular character in the locker room, his arrival, together with Pither, helped to partially rejuvenate a set of forwards who’d failed to collective deliver over the course of the season. A physical presence on the ice, his unflashy but effective play helped unlock the potential of others out there with him, leading the team to a strong run of performances over the final weeks of the league season. Not only was his arrival good news in taking the strain off other forwards, but he also managed to score at a point a game – not a bad effort at all for someone coming into a side that’d struggled offensively all season.

Tina Taylor
Arriving shortly after Pither and another welcome injection of new blood he did alright with the limited amount of games he played for the Panthers and it was a shame he didn’t feature in POFW, perhaps he could have made a difference.  He didn’t do anything wrong, was a pretty good player but I didn’t see anything that particularly excited me, he was a welcome addition when he arrived but I don’t expect to see Vaskivuo return next season.