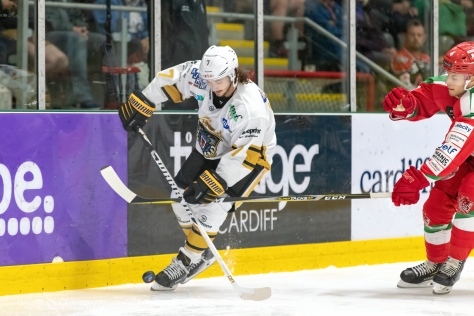 Joe Balm
Pretty poor season for Lacho offensively which probably explains why he’s been a healthy scratch on occasion, however he has been good on the PK.  Would look to upgrade if possible.

Sam Balm
Another poor year for Lacho with half as many points this season compared to 17/18.  This year Lacho has found himself increasingly pigeon-holed into a fourth-line/penalty killing role which has limited his icetime.  For me there are serious question marks over whether he should be re-signed for 19/20 as I believe there are other British players we could attempt to sign who would offer more to the team.

Antoine Marie-Jeanne
Once he was the darling of the Nottingham crowd.  A player with bags of potential it was surely a case of when, not if, he’d spread his wings and play in better leagues than the EIHL.  But that hasn’t happened and what we’ve seen is a player who could perform wonders offensively, be progressively changed into a defensive forward much to the dismay and disillusionment of the #Panthersnation.  There’s no doubting Lacho’s penalty killing is up there with the best GB has to offer but surely you need more from a player than to play only on the PK?  And he wasn’t even doing that towards the end of the season, finding himself either scratched or benched.  By my reckoning he’s due a testimonial next season, so it’d be a surprise if he doesn’t return, but I don’t know how much longer the Panthers can give a player who’s on the slide, regardless of whose fault it is.

Adam Reddish
Unfortunately I think time’s up Rob.  Lacho’s had a cracking run as a Panther and won a plethora of accolades, but I’m struggling to see what he offers to this club that it couldn’t otherwise seek from a much younger Brit who’s at the beginning of their developmental cycle.  Lacho became increasingly peripheral as the season progressed, with reduced ice time and even controversially being kept out the line-up on a couple of occasions by Chernomaz.  He’s due a Testimonial next season, but is that the sole reason the club would choose to re-employ him for 2019-20?  Maybe a fresh challenge would suit all parties.

Tina Taylor
I’ve said this for one or two of the Brits but I’m going to say it again, we know what we’re getting with Lacho, he’s not a top goal scorer, he’s not the next David Clarke but he is consistent, he’s dependable, good on the penalty kill and he’s been shooting the puck more this season.  I don’t have any stats to back that up because this league really doesn’t have the resources for that but I really do think he has!

It’ a similar story for Rob Lachowicz as I wrote for Ollie Betteridge, if there were more goals he’d be great but Lacho isn’t a developing young player anymore, he’s almost a veteran and I’m not you can teach an old dog new tricks.