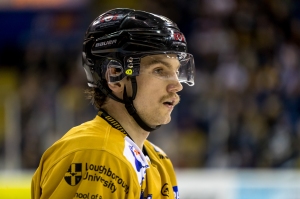 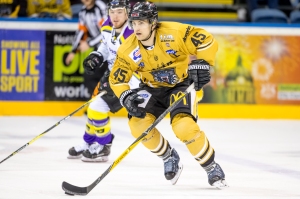 Paul Balm
I think the captaincy weighed heavy on his shoulders. He never really seemed to be anything more than a shadow of his previous performances.

Jono Bullard
I felt Lee was better than the previous two seasons and maybe making him captain made him more responsible. We also saw a few glimpses of the player that wasn’t afraid to drop the gloves and take no nonsense which was great to see.
Would he have been my choice of captain? No, and he didn’t appear to be vocal or lead on the ice if I’m honest, but very few have the privilege of seeing what happens behind the scenes and the word from those within the inner sanctum was that he was very effective.

Andy Haywood
I thought when he was made captain of the team it was a real good move by Corey. Lee had been struggling to find the form that got him a job with the Panthers and giving him that extra responsibility, I felt, was a good thing. Overall, I think Lee improved from last season and had a fairly solid season. Nothing flashy and with mistakes in his game, but on the whole, I think he was good.
The criticism of his captaincy is something that reared its head during the season. Generally, and this is a sweeping generalisation, fans seem to want to see an all action all effort captain of their team, think Fox, Benedict, Brown etc. At the end of the day the captaincy doesn’t affect the fanbase as much as it does the team, and we don’t get to see what goes on back there. From what I gather there was no issue in him being captain from within, so with that in mind, if he is captain again next season I’ll be more than happy. The room will have enough experience and leaders that one man having a C stitched on his jersey, ultimately, won’t make too much of a difference.

Antoine Marie-Jeanne
He’s a decent d-man. Not the sort of Captain I’m keen on if I’m honest (I like a shouter) but Stevie had some big shoes to fill based on past players who had worn the C. Still plenty left in the tank although I’d like to see him return to the hard hitting no nonsense player he was early in his Panthers career.

Adam Reddish
Another steady season for this year’s captain. With the extra responsibility, perhaps a stepping up of presence was expected from the GB international. However, his positional play around his own net has sometimes been lacking, often resulting in opposing forwards finding space they shouldn’t be afforded. Perhaps the removal of the ‘C’ for 2018-19 may allow Lee to refocus more on his defensive duties.

Tina Taylor
In his first season as Captain Steve Lee has conducted himself as he does generally, getting his head down and getting on with it.  I can’t say that he would have been my first choice as Panthers captain but from what I’ve heard his team mates believe that he’s doing a good job so who am I to argue?  As a player he’s been paired with ice time leader Yann Sauvé and mostly this has been a decent pairing, they’ve been heavily leaned on in all situations, have racked up the ice time and Lee himself has blocked so many shots this season he should have his own Shots on Goal tally!  In short, it’s been another standard season for Lee, he’s got less physical as he’s got older but he’s no less valuable to the team and until there’s someone (I’m looking at you Josh Tetlow!) that Panthers can bring in to fill the gap when he eventually retires, we need to look after him.