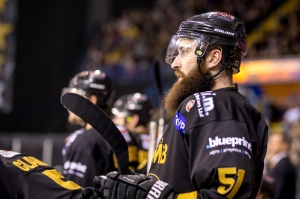 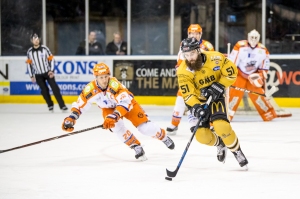 Paul Balm
Like the Panthers season he started well and then faded away. Some nice OT winners at the start of the year and a good passer of the puck.

Jono Bullard
His ability to unlock defences and provide passes for goals was outstanding (see Mokshantsev vs SC Bern & Bussieres vs Sheffield), however we did not see it often enough.
Phillips was a bit of an enigma. An undoubtedly skilled player but seemed to go missing during our mid-season slump. That’s not to say there was a lack of effort as there wasn’t, but it was worrying that a player who could so easily provide a killer pass early season seemed to lose that ability as the season went on.

Andy Haywood
Pretty solid season from Phillips. Great hands and vision, I wish he’d have shot the puck more, he had a great shot on him, but seemed to freeze and look for the pass at most opportunities. Sometimes he was impossible to move from the puck and it looked like it was glued to his stick, other times it looked like he’d never received a pass in his career. Quite frustrating at times, because he could have been a real standout player in the league I felt but he didn’t quite have the knack on a consistent basis.

Antoine Marie-Jeanne
“Mr Overtime” before December, pretty much “Mr Anonymous” after. Showed some unbelievable hands early on but seemed to suffer more than most with the Panthers slump and never really recovered.

Adam Reddish
Undoubtedly skilful, and gifted with great hands and vision to move the puck intelligently, a lot was expected. However, opponents quickly latched onto Phillips’ tendency to puckhandle for way too long – and as Neilson’s PP quarterback, this resulted in numerous missed opportunities and turnovers. His game’s lack of urgency combined with logging vast quantities of ice time, in no small way contributed to Panthers lethargic offensive efforts.

Tina Taylor
Great start, average finish. During the CHL campaign we were talking about Phillips passing ability on the podcast, tentatively calling it ‘David Ling-esque’ and for a while (save for that attempted clear in Sheffield that landed straight on a Steelers stick) it was a good player to watch whether he was on the puck or not, he seemed to know where to be.  As the season went on, I’m not sure what happened, the passing wasn’t so crisp and the less said about his role on our god awful power play the better!  He’s a very measured player but in the latter stages of the season he was off the pace in terms of puck movement and I can’t say I have any emotion attached to him departing if he is.